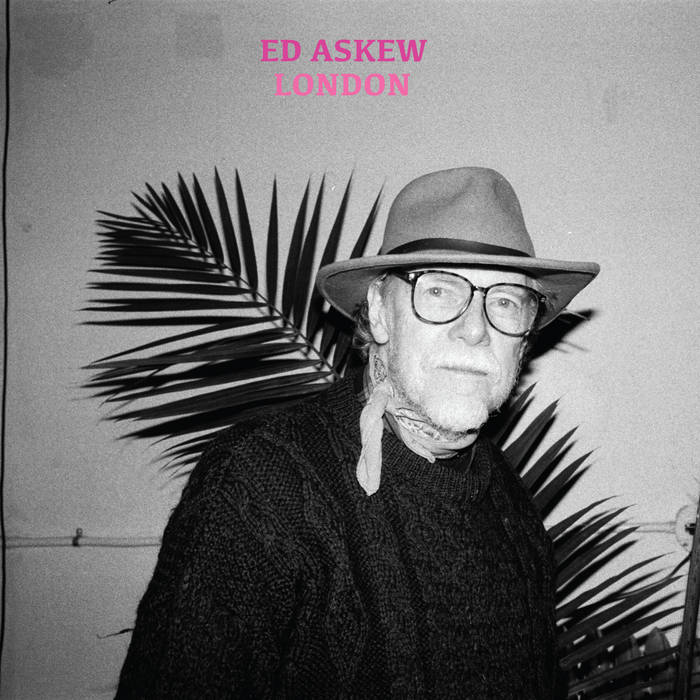 Deadpixie Ed was brilliant on this tour which this reflects.

Alex Neilson (Alex Rex) booked a summer tour with two psych folk legends -- national treasure Mike Heron of the towering Incredible String Band and then the artist who wrote the songs on this EP, painter and songwriter Ed Askew.
Still known for his 1968 masterpiece "Ask the Unicorn" (remastered / reissued by Tin Angel in 2015), Askew has been crafting a sort of art crooner pop for decades -- vivid imagistic lyrics supported by wild melodies and his increasingly warm voice. Askew's two most recent studio albums are also on Tin Angel and feature Sharon van Etten, Marc Ribot and Mary Lattimore.
"The songs are intensely personal... but also somehow universal in their humble portrayal of the human condition." - Ben Graham, The Quietus
The tour was with Neilson own psych folk darlings, Trembling Bells. The groups soon began to mingle. By the end, everybody sang back up on the Sikh dharma quoted in Heron's 'A Very Cellular Song.' And early on Ed Askew's set included Neilson on drums and Mike Hasting of the Bells on guitar in addition Askew's keyboardist Jay Pluck.
Prior to what would be an iconic show at Cafe Oto in London, this group went to Flesh and Bone Studio in Hackney to record a session live to track with Owen Pratt. They were joined by friend and collaborator, violinist Jordan Hunt (The Irrespressibles, Theo Adams Company).
This album is that live to track afternoon session. The songs, all of them from the tour set list, cover the range of Askew's career.
The title track from his 1968 masterpiece is there; and also 'Little Eyes' which is a title track as well from the "sister album" to Ask the Unicorn which was recorded the same year but remained unreleased until 2007 (DeStijl).
'Coast to Coast' and 'Little Clouds' are brand new songs -- "All the times I've tried / to love some guy / to love some guy."
'Starlight in Brooklyn' was written the night Askew got home from his very first tour in 2012. And 'Roadio Rose' remains Askew's most played and one of his most amazing songs. "Askew also has a painter's talent for imagery and symbolism; the black rider breaking silver chains amid the tumbling piano chords on 'Roadio Rose.'" -- Ben Graham, The Quietus